“Once the diagnosis of NCGS is reasonably reached, the management and follow-up of patients is completely obscure. A logical approach is to undertake a gluten-free dietary regimen for a limited period (e.g., six months), followed by the gradual reintroduction of gluten. During the gluten-free diet, the ingestion of prolamine peptide (gliadin)-derived from wheat, rye, barley, oats, bulgur, and hybrids of these cereal grains-should be avoided. Rice, corn, and potatoes have been the typical substitutes, but nowadays other different cereals and pseudocereals, such as amaranth, buckwheat, manioc, fonio, teff, millet, quinoa, and sorghum, can be used. After some period on a gluten-free diet, the reintroduction of gluten can start with cereals of low gluten content (e.g., oats). In addition, einkorn farro (Triticum monococcum) can be used, having no direct in vitro or ex vivo toxicity and low (7%) gluten content[41]”. (Non-celiac gluten sensitivity: Time for sifting the grain. Luca Elli, Leda Roncoroni, and Maria Teresa Bardella. Copyright ©The Author(s) 2015. Published by Baishideng Publishing Group Inc. All rights reserved).

Scientific research has several times supported and encouraged the use of grains with low toxicity in the prevention of celiac disease; in the research we are now presenting, some grains have been studied highlighting their profile regarding both the presence of peptides resistant to gastro-intestinal digestion and, among these, those containing the “toxic” fraction (table 3)  “ ….omissis Even if none of them can be considered safe for CD patients, grain with reduced amount of major T-cell stimulatory epitopes may help in the prevention of CD, since previous studies demonstrated that the amount and duration to gluten exposure are strictly linked to the initiation of this pathology.” (A Comprehensive Peptidomic Approach to Characterize the Protein Proﬁle of Selected Durum Wheat Genotypes: Implication for Coeliac Disease and Wheat Allergy.Rosa Pilolli , Agata Gadaleta, Luigia Di Stasio , Antonella Lamonaca, Elisabetta De Angelis , Domenica Nigro , Maria De Angelis , Gianfranco Mamone and Linda Monac. Published: 1 October 2019).

Abstract
The wheat varietal selection undertaken by breeders in recent decades has tailored mainly to improve technological and productivity-related traits; however, the latter has resulted in a considerable impoverishment of the genetic diversity of wheat-based products available on the market. This pitfall has encouraged researchers to revalue the natural diversity of cultivated and non-cultivated wheat genotypes in light of their diﬀerent toxic/immunogenic potential for celiac disease and wheat-allergic patients. In the present investigation, an advanced proteomic approach was designed for the global characterization of the protein proﬁle of selected tetraploid wheat genotypes (Triticum turgidum). The approach combined proteins/peptides sequence information retrieved by speciﬁc enzymatic digestions (single and dual proteolytic enzymes) with protein digestibility information disclosed by means of in-vitro simulated human gastroduodenal digestion experiments. In both cases, the peptide pools were characterized by discovery analysis with liquid chromatography high-resolution tandem mass spectrometry, and speciﬁc amino acid sequences were identiﬁed via commercial software. The peptide list was screened for in silico toxicity/immunogenicity risk assessment, with the aid of various open-source bioinformatics tools for epitopes matching. Given the global information provided by the designed proteomic approach, the in silico risk assessment not only tackled toxicity implication for celiac disease patients, but also scouted for immunogenic sequences relevant for wheat allergic patients, achieving a comprehensive characterization of the protein proﬁle of the selected genotypes. These latter were assessed to encrypt a variable number of toxic/immunogenic epitopes for celiac disease and wheat allergy, and as such they could represent convenient bases for breeding practices and for the development of new detoxiﬁcation strategies.

END_OF_DOCUMENT_TOKEN_TO_BE_REPLACED

The genetics of celiac disease

by luciano on 28 November 2019
the genetics of celiac disease

by luciano on 28 November 2019
Prevention of CD (celiac disease)

Abstract: During the XX Century, the widespread use of modern wheat cultivars drastically reduced the cultivation of ancient landraces, which nowadays are conﬁned to niche cultivation areas. Several durum wheat landraces adapted to the extreme environments of the Mediterranean region, are still being cultivated in Sicily, Italy. Detailed knowledge of the genetic diversity of this germplasm could lay the basis for their eﬃcient management in breeding programs, for a wide-range range of traits. The aim of the present study was to characterize a collection of durum wheat landraces from Sicily, using single nucleotide polymorphisms (SNP) markers, together with agro-morphological, phenological and quality-related traits. Two modern cv. Simeto, Claudio, and the hexaploid landrace, Cuccitta, were used as outgroups. Cluster analysis and Principal Coordinates Analysis (PCoA) allowed us to identify four main clusters across the analyzed germplasm, among which a cluster included only historical and modern varieties. Likewise, structure analysis was able to distinguish the ancient varieties from the others, grouping the entries in seven cryptic genetic clusters. Furthermore, a Principal Component Analysis (PCA) was able to separate the modern testers from the ancient germplasm. This approach was useful to classify and evaluate Sicilian ancient wheat germplasm, supporting their safeguard and providing a genetic ﬁngerprint that is necessary for avoiding commercial frauds to sustaining the economic proﬁts of farmers resorting to landraces cultivation. (High-Throughput Genotype, Morphology, and Quality Traits Evaluation for the Assessment of Genetic Diversity of Wheat Landraces from Sicily. Maria Carola Fiore , Francesco Mercati, Alﬁo Spina, Sebastiano Blangiforti, Gianfranco Venora, Matteo Dell’Acqua, Antonio Lupini, Giovanni Preiti , Michele Monti, Mario Enrico Pè and Francesco Sunseri. 30 aprile 2019.) 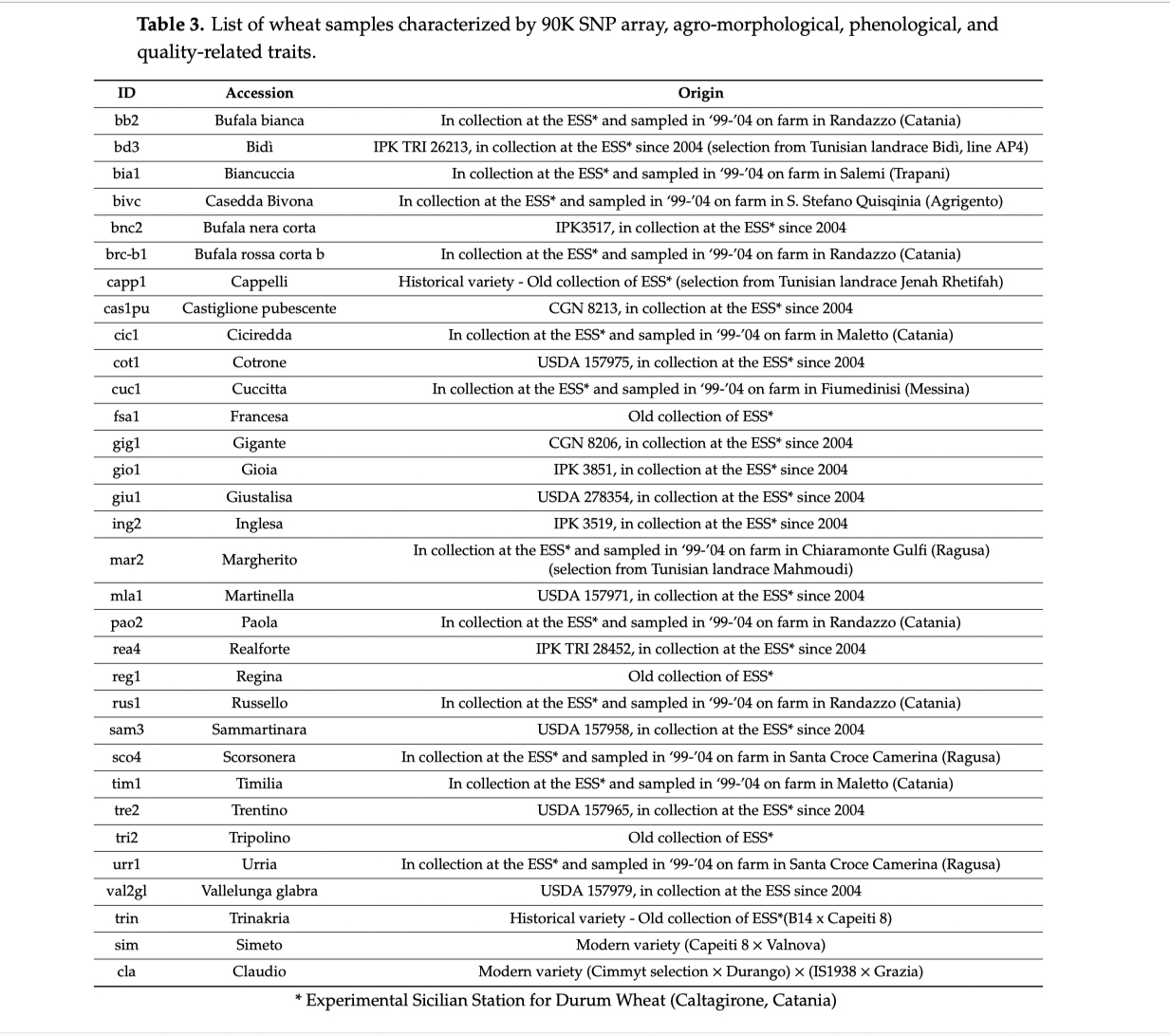 Table 2
Characteristics of the grains examined 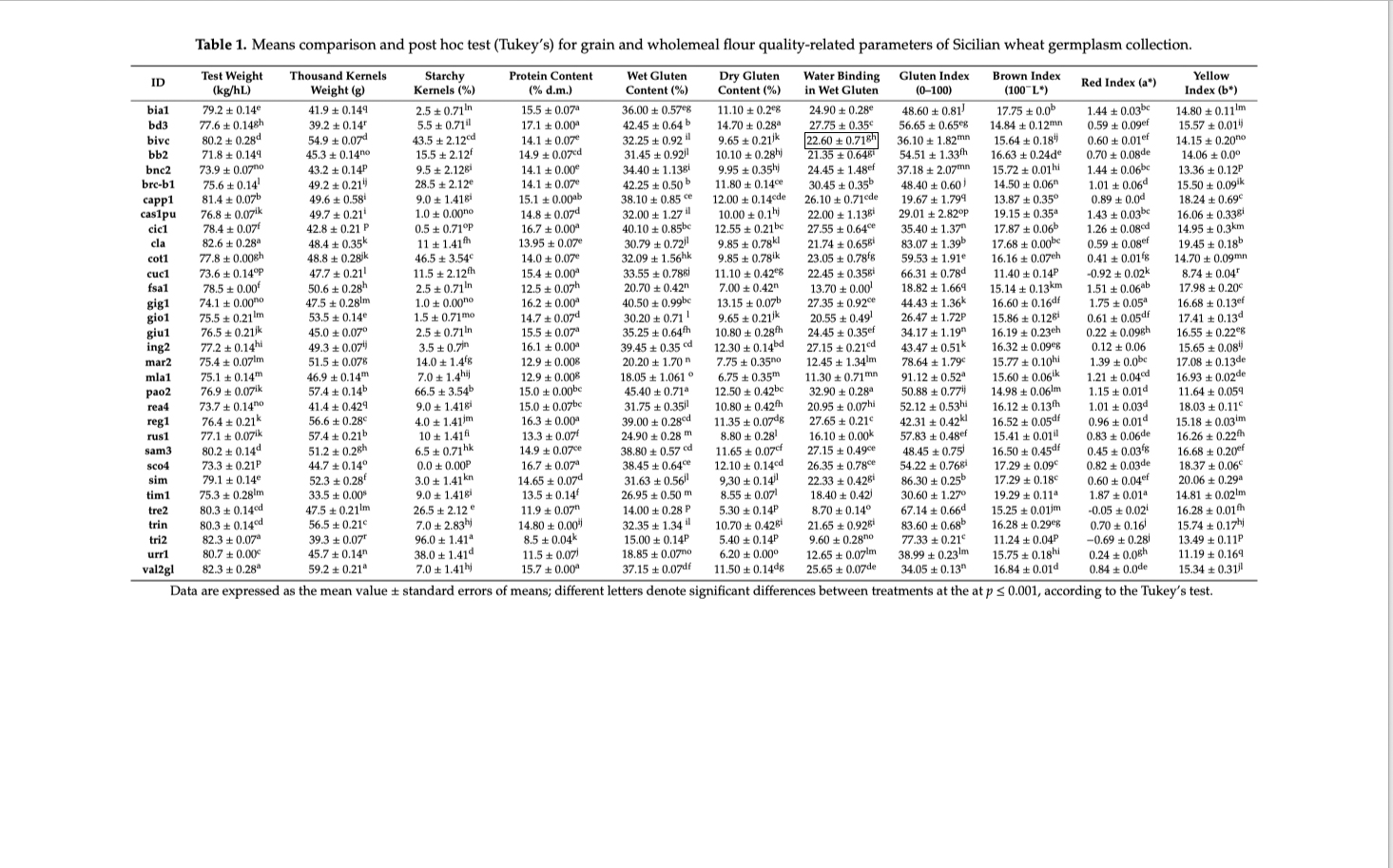