Mixture of grains (evolutive grain): no thanks!

The consumer demand is increasingly oriented to knowing what they put on the plate, or rather to have the possibility to know the whole product chain and its characteristics. The wine and oil supply chain, to cite just two important examples, testify to the importance of complete and possibly exhaustive information, which is also the key, together with the quality, of the success of the most famous products. With wheat do we want to walk this path backwards? Do we eat what the field produces as mother nature decides?

END_OF_DOCUMENT_TOKEN_TO_BE_REPLACED

Integrated Evaluation of the Potential Health Benefits of Einkorn-Based Breads

“Abstract
Nowadays the high nutritional value of whole grains is recognized, and there is an increasing interest in the ancient varieties for producing wholegrain food products with enhanced nutritional characteristics. Among ancient crops, einkorn could represent a valid alternative. In this work, einkorn flours were analyzed for their content in carotenoids and in free and bound phenolic acids, and compared to wheat flours. The most promising flours were used to produce conventional and sourdough fermented breads. Breads were in vitro digested, and characterized before and after digestion. The four breads having the best characteristics were selected, and the product of their digestion was used to evaluate their anti-inflammatory effect using Caco-2 cells. Our results confirm the higher carotenoid levels in einkorn than in modern wheats, and the effectiveness of sourdough fermentation in maintaining these levels, despite the longer exposure to atmospheric oxygen. Moreover, in cultured cells einkorn bread evidenced an anti-inflammatory effect, although masked by the effect of digestive fluid. This study represents the first integrated evaluation of the potential health benefit of einkorn-based bakery products compared to wheat-based ones, and contributes to our knowledge of ancient grains. “
Depeening
Integrated Evaluation of the Potential Health Benefits of Einkorn-Based Breads. Fabiana Antognoni et altri

Integrated Evaluation of the Potential Health Benefits of Einkorn-Based Breads 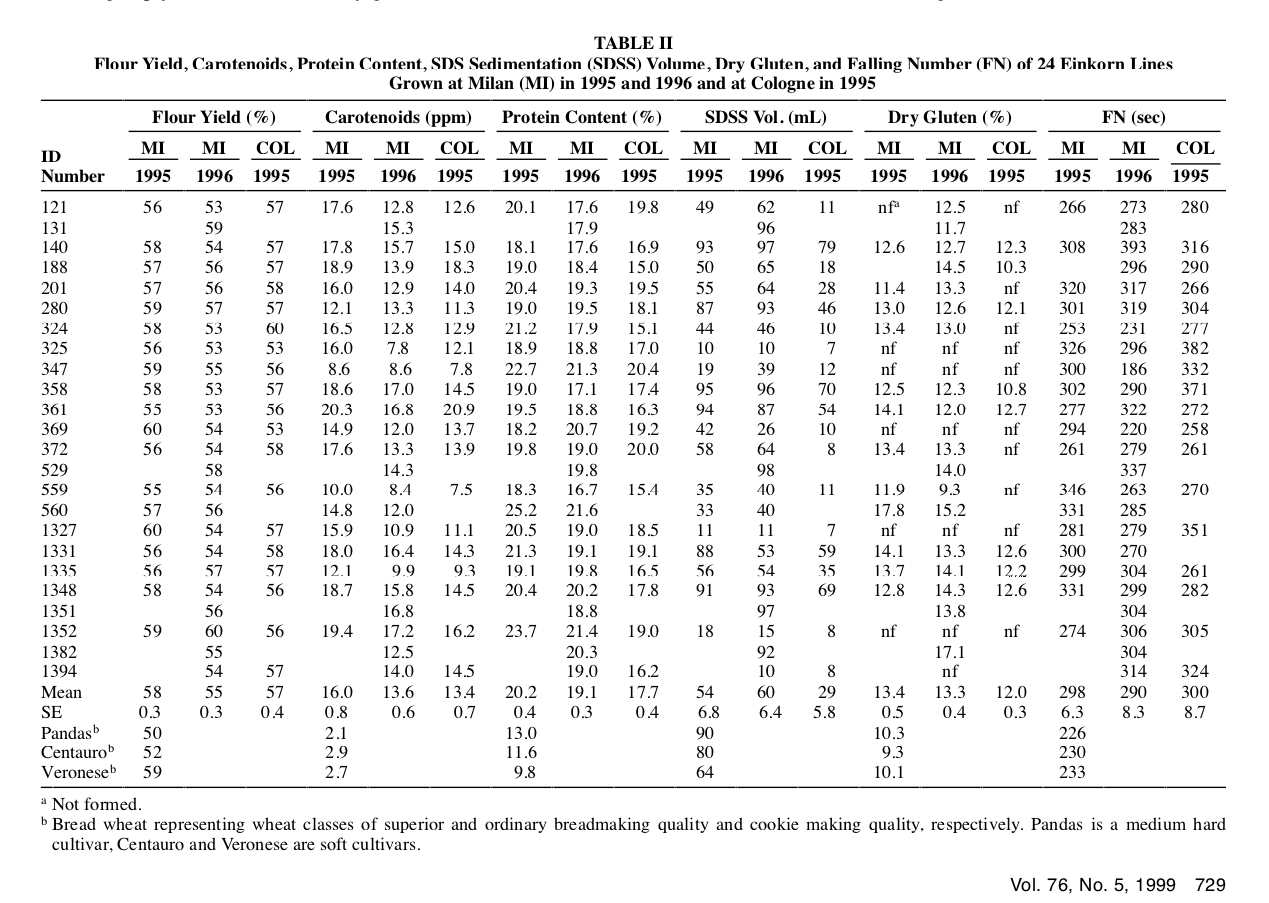 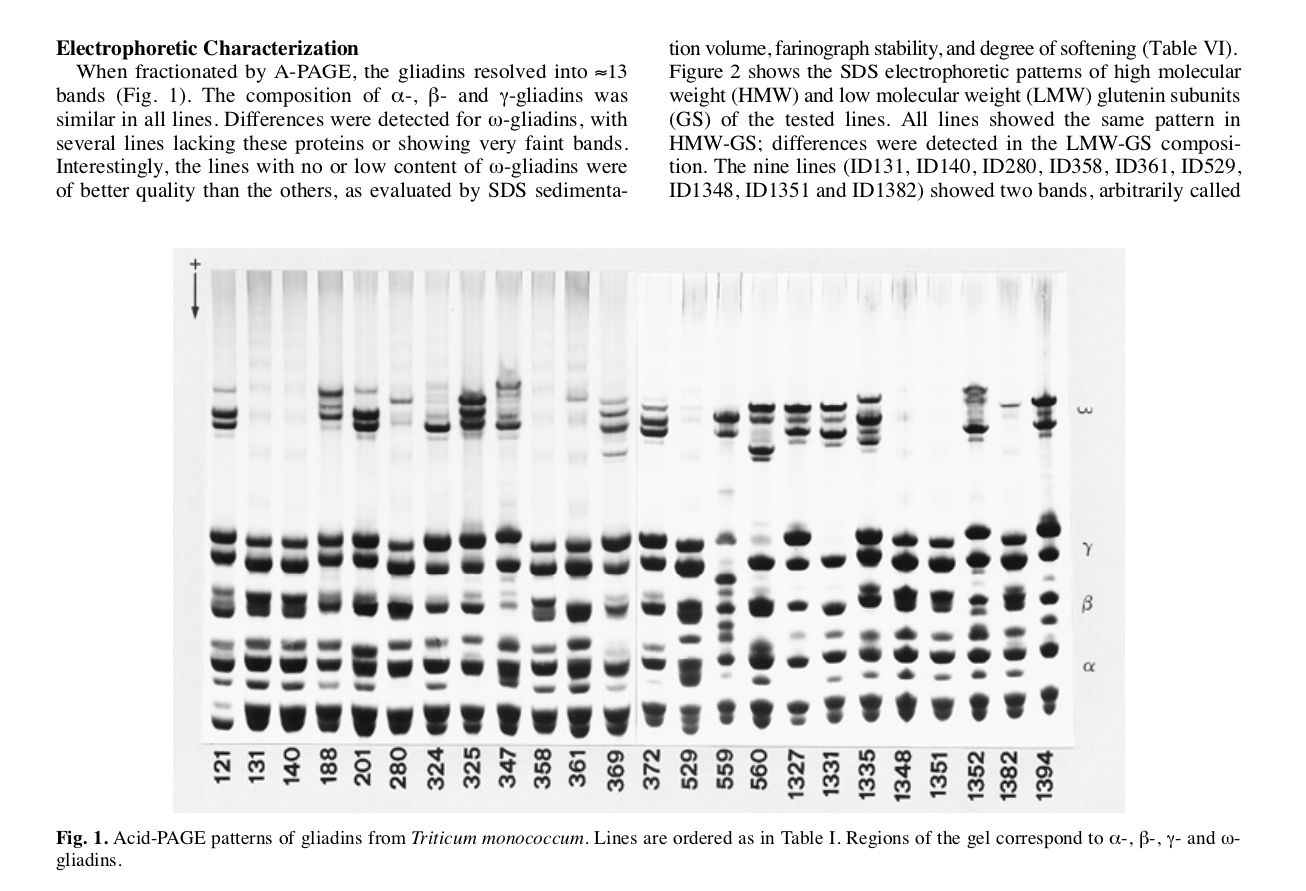 Study on the Immunoreactivity of Triticum monococcum (Einkorn) Wheat in Patients with Wheat-Dependent Exercise-Induced Anaphylaxis for the Production of Hypoallergenic Foods. Carla Lombardo, Michela Bolla Roberto Chignola Gianenrico Senna Giacomo Rossin Beatrice Caruso, Carlo Tomelleri Daniela Cecconi Andrea Brandolini Gianni Zoccatelli. Cite This:J. Agric. Food Chem.201563378299-8306. Publication Date:September 2, 2015. https://doi.org/10.1021/acs.jafc.5b02648 Copyright © 2015 American Chemical Society Journal of Agricultural and Food Chemistry
Abstract
“Wheat [Triticum aestivum (T.a.)] ingestion can cause a specific allergic reaction, which is called wheat-dependent exercise-induced anaphylaxis (WDEIA). The major allergen involved is ω-5 gliadin, a gluten protein coded by genes located on the B genome. Our aim was to study the immunoreactivity of proteins in Triticum monococcum (einkorn, T.m.), a diploid ancestral wheat lacking B chromosomes, for possible use in the production of hypoallergenic foods. A total of 14 patients with a clear history of WDEIA and specific immunoglobulin E (IgE) to ω-5 gliadin were enrolled. Skin prick test (SPT) with a commercial wheat extract and an in-house T.a. gluten diagnostic solution tested positive for 43 and 100% of the cases, respectively. No reactivity in patients tested with solutions prepared from four T.m. accessions was observed. The immunoblotting of T.m. gluten proteins performed with the sera of patients showed different IgE-binding profiles with respect to T.a., confirming the absence of ω-5 gliadin. A general lower immunoreactivity of T.m. gluten proteins with scarce cross-reactivity to ω-5 gliadin epitopes was assessed by an enzyme-linked immunosorbent assay (ELISA). Given the absence of reactivity by SPT and the limited cross-reactivity with ω-5 gliadin, T.m. might represent a potential candidate in the production of hypoallergenic bakery products for patients sensitized to ω-5 gliadin. Further analyses need to be carried out regarding its safety”.