Test
Two loaves were made with two einkorn wheat flours which are completely identical in quantity of ingredients and methods of execution. Both flours used belong to the einkorn genotype type ID331; one (A) grown without any fertilizer or other chemical compounds, the other (B) grown with the supply of nitrogen.
Both loaves were prepared with the same method:
“New Method for making fermented bakery products n. EP 3305078B1: at the bottom of https://glutenlight.eu/en/2019/09/27/einkorn-bread100/”.
The result clearly shows how the strength of gluten (1) played a decisive role in giving bread (B) a higher volume, a more open and regular crumb (Photo NN. 3, 4, 5, 6, 7, 8).
It is known that the supply of nitrogen contributes to increasing both the quantity and strength of gluten (2). This was a decisive factor for the development of agrotechnics which allowed flour to be produced with better workability from an industrial point of view; the increase in the strength of gluten, however, led in parallel to a less digestible (3) and less tolerable (4) gluten.
END_OF_DOCUMENT_TOKEN_TO_BE_REPLACED

Dietary Triggers in Irritable Bowel Syndrome: Is There a Role for Gluten?

A very important study that highlights the superimposition of the symptoms of irritable bowel syndrome with those generated by the sensitivity to non-celiac gluten, by the ATI and by Fodmaps.

“A tight link exists between dietary factors and irritable bowel syndrome (IBS), one of the most common functional syndromes, characterized by abdominal pain/discomfort, bloating and alternating bowel habits. Amongst the variety of foods potentially evoking “food sensitivity”, gluten and other wheat proteins including amylase trypsin inhibitors represent the culprits that recently have drawn the attention of the scientific community. Therefore, a newly emerging condition termed non-celiac gluten sensitivity (NCGS) or nonceliac wheat sensitivity (NCWS) is now well established in the clinical practice. Notably, patients with NCGS/NCWS have symptoms that mimic those present in IBS. The mechanisms by which gluten or other wheat proteins trigger symptoms are poorly understood and the lack of specific biomarkers hampers diagnosis of this condition. The present review aimed at providing an update to physicians and scientists regarding the following main topics: the experimental and clinical evidence on the role of gluten/wheat in IBS; how to diagnose patients with functional symptoms attributable to gluten/wheat sensitivity; the importance of double-blind placebo controlled cross-over trials as confirmatory assays of gluten/wheat sensitivity; and finally, dietary measures for gluten/wheat sensitive patients. The analysis of current evidence proposes that gluten/wheat sensitivity can indeed represent a subset of the broad spectrum of patients with a clinical presentation of IBS. (J Neurogastroenterol Motil 2016;22:547-557). Umberto Volta, Maria Ines Pinto-Sanchez et al.

Extrac from the study:
…..omissis. Experimental Evidence for a Role of Wheat Components in Irritable Bowel Syndrome. Different mechanisms have been proposed to explain how gluten may trigger gastrointestinal symptoms in the absence of celiac disease (Figure). 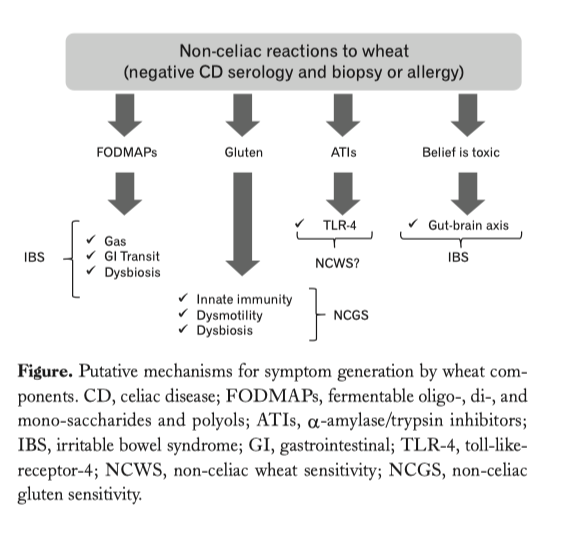 In vitro studies have demonstrated that digests of gliadin increase the expression of co-stimulatory molecules and the production of proinflammatory cytokines in monocytes and dendritic cells (40,57,58). Certain “toxic” (that only stimulates the innate immune response) gliadin-derived peptides such as the 31-43mer, may evoke epithelial cell dysfunction, increased IL-15 production and enterocyte apoptosis (59). Recent studies have demonstrated increased expression of TLR-2 in the intestinal mucosa of non-celiac compared to celiac patients, suggesting a role of the innate immune system in the pathogenesis of non-celiac reactions to gluten or other wheat components (49). Other studies have shown that monocytes from HLA-DQ2+ non-celiac individuals spontaneously release 2-3 fold more IL-8 than monocytes from HLA-DQ2 negative patients. This suggests that patients without celiac disease (no enteropathy and negative specific serology), but with positive HLA-DQ2 status, may represent a subpopulation reacting mildly to gluten (60). In terms of gut dysfunction, gluten sensitization in mice has been shown to induce acetylcholine release, one of the main excitatory neurotransmitters in the gut, from the myenteric plexus (57).
This correlates with increased smooth muscle contractility and a hypersecretory status with increased ion transport and water movements (57). These functional effects induced by gluten were not accompanied by mucosal atrophy, and were not observed after sensitization with non-gluten proteins. Interestingly gluten-induced gut dysfunction was particularly notable in mice transgenic for the human celiac gene HLA-DQ8 (57).
ATIs, a group of wheat proteins that confer resistance of the grain to pests, are strong inducers of innate immune responses via TLR4 and via the myeloid differentiation factor 88-dependent and -independent pathway (40). This activation occurs both in vitro and in vivo after oral ingestion of purified ATIs or gluten, while gluten-free cereals display no or minimal activities (61). The role of ATIs in IBS is not yet known, however there is clear description of a mechanism that could be involved in the generation of gut dysfunction and symptoms. These mechanisms are different from those proposed for gluten and thus it is conceivable that they could co-exist in given patients or have a synergistic effect.

END_OF_DOCUMENT_TOKEN_TO_BE_REPLACED

An interesting study that explores the possibilities of obtaining low toxicity grains by investigating the quality, quantity and distribution of the toxic fractions (for celiacs) of whea

“…..omissis. Wheat gluten proteins are traditionally classified into two groups based on their solubility. The gliadins are readily extracted from flour with alcohol:water mixtures, such as 60% (v/v) ethanol or 50% (v/v) propan-1- ol, while the glutenins were traditionally extracted with dilute acid or alkali. However, these fractions contain related proteins and the differences in solubility are determined by their presence as monomers or polymers. Thus, the gliadin fraction comprises mainly proteins which are present as monomers, with small amounts of polymeric components, while the glutenins comprise “subunits” assembled into high molecular mass polymers stabilized principally by inter-chain disulphide bonds. When these disulphide bonds are reduced the monomeric glutenin subunits resemble the gliadins in being soluble in alcohol: water mixtures. Hence, the protein subunits present in both fractions correspond to alcohol-soluble prolamin proteins as defined in the classic studies of Osborne (1924). more in full text”. Improving wheat to remove coeliac epitopes but retain functionality. Peter R. Shewry and Arthur S. Tatham. Journal of Cereal Science 2016 Jan

END_OF_DOCUMENT_TOKEN_TO_BE_REPLACED

“Previous studies have documented that landraces and older wheat varieties contain more diverse gene combinations for prolamins (wheat proteins) in comparison to modern varieties (10, 11). Literature shows variations for speciﬁc gene sequences mainly in the epitopic regions of Glia-α9, Glia-α2, Glia-α20, and Glia-α in older landraces (9). In the last decade in the context of CD, the immunogenicity of T-cell speciﬁc epitopes has been bought to the forefront (9, 12). The immunogenic potential amongst diﬀerent hexaploid wheat varieties is variable; hence it is possible that there are breeding-induced diﬀerences in the presence and expression of T-cell stimulatory epitopes in modern varieties of wheat (13, 14). This raises the question of, whether there is any speciﬁc variety of wheat which is less immunogenic and can be used in breeding programs for developing a wheat genotype completely safe for consumption by patients suﬀering from CD”.

Highlights:
• The identiﬁcation of less/non-immunogenic wheat species is an important milestone that could help patients or even prevent CD.
• With the use of gluten-speciﬁc T-cells and PBMCs, wheat genotypes containing minimally harmful gluten sequences can be selected.