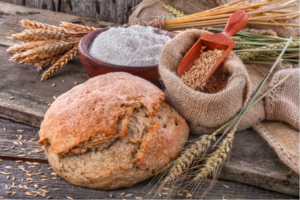 END_OF_DOCUMENT_TOKEN_TO_BE_REPLACED

Surdough and phytates
“Increasing fiber content in flour may result in a lower assimilation of minerals complexed by phytates. An optimisation of the fermentation step with surdough allowed to improve both the bioavailability of minerals as well as the sensory attributes of the resulted bread. (16mo. IFOAM Organic World Congress, Modena, Italy, June 16-20, 2008 Archived at ttp://orgprints.org/view/projects/conference.html)”.

Note: Phytic acid is traditionally considered an anti-nutritional factor, ie a substance that can limit the absorption or use of nutrients. In the specific case, by binding to them to form insoluble salts (phytates and phytin), phytic acid hinders the absorption of some minerals (calcium, iron, magnesium and zinc).

Sourdough fermentation and basic baking properties
“Unfortunately, there is often a trade- off between degradation of reactive gluten and retention of gluten for basic baking properties. Large amounts of time and heat may be needed for microbial enzymes to break down problematic pep- tides. To fully degrade the 33-mer α-gliadin peptide in wheat required 24 h at 30 °C (Gallo and others 2005), while durum required 72 h of fermentation at 37 °C to meet gluten-free la- beling standards (De Angelis and others, 2010). HMW glutenins, which are important for baking and pasta integrity, are degraded prior to and more extensively than reactive prolamins during sour- dough fermentation (Ga ̈nzle and others 2008; Wieser and others 2008). Extensively fermented dough has a high ratio of gliadins to glutenins, which is very undesirable for bakers. The disulfide bonds holding together the gluten macropolymer (GMP), an in- tegral component of baking quality, begin to degrade long before glutens. Only 5 h of fermentation with Lactobacilli or acidic chem- icals degraded GMP by up to 46% (Wieser and others 2008). Pentosans, an important component for baking rye bread, were also hydrolyzed in germinated sourdough (Loponen and others 2009). Consequently, the long and hot sourdough fermentation to hydrolyze prolamins compromises functional baking properties of the dough. (A Grounded Guide to Gluten: How Modern Genotypes and Processing Impact Wheat Sensitivity – Chapter Fermentation and microbial enzymes – Lisa Kissing Kucek, Lynn D. Veenstra, Plaimein Amnuaycheewa, and Mark E. Sorrells. Comprehensive Reviews in Food Science and Food Safety Vol. 14, 2015.)”.

Microbiology of sourdough
“It is well known that the type of bacterial flora developed in each fermented food depends on water activity, pH (acidity), minerals concentration, gas concentration, incubation temperature and composition of food matrix (Font de Valdez et. al. 2010). The microflora of raw cereals is composed of bacteria, yeast and fungi (104 – 107 CFU/g), while flour usually contains 2 x 104 – 6 x 106 CFU/g (Stolz, 1999). In sourdough fermentation major role play heterofermentative species of LAB (Salovaara, 1998; Corsetti & Settani, 2007), especially when sourdoughs are prepared in a traditional manner (Corsetti et. al., 2003). Lactobacillus sanfranciscensis, Lactobacillus brevis and Lactobacillus plantarum are the most frequently lactobacilli isolated from sourdough (Gobbetti, 1998; Corsetti et. al. 2001; Valmorri et. al., 2006; Corsetti & Settanni, 2007). The following yeasts have been detected in cereals (9 x 104 CFU/g) and flour (2 x 103 CFU/g): Candida, Cryptococcus, Pichia, Rodothorula, Torulaspora, Trychoporon, Saccharomyces and Sporobolomyces. Saccharomyces cerevisiae is not found in the raw materials. Its occurance in sourdough has been explained by the application of baker’s yeast in most daily bakery practice (Corsetti et. al., 2001). The importance of antagonistic and synergistic interactions between lactobacilli and yeasts are based on the metabolism of carbon hydrates and amino acids and the production of carbon dioxide (Gobetti & Corsetti 1997). Lactic and acetic acid are predominant products of sourdough fermentation). Influence of Acidification on Dough Rheological Properties Daliborka Koceva Komlenić, Vedran Slačanac and Marko Jukić Faculty of Food Technology, Josip Juraj Strossmayer University of Osijek, Croatia 2012- www.intchopen)”.