How to grow organic

Organic cultivation is a method of production that has its basic principles in the care of soil fertility and in the balance of the environment in which it is grown. It is therefore not the substitution of fertilizers, herbicides, fungicides, pesticides in general, with what is admitted by the European regulation, but the correct application of the principles of agro ecology, having as its objective to increase the biodiversity in the soil and the ground for the search for nutritional and environmental balance. The main actions on which it is based are:
• Improve and increase organic fertility – through the use of composted organic fertilizers, the practice of green manure, the burial of crop residues is the inclusion in large rotations of legume crops, in order to increase the quantity and quality of the organic substance of the soil. To support yields and improve the quality of production, it is possible to resort to the list of fertilizers allowed by the regulation;
• Rotation or rotation of crops – is the key to the success of herbaceous and horticultural crops. A Ministry decree indicates that: between a crop and its return on the same land, there is the cultivation of at least two cycles of different crops, of which at least one is composed of legumes or a green manure. This should be considered the minimum certifiable limit, it would be appropriate to diversify as much as possible the type of crops, also to encourage the company biodiversity. The rotation is then the main control element of weeds supplemented by mechanical actions and containment and prevention against pathologies and pests;
• The varietal choice – to date, research has produced and tested very few specific varieties for the organic; it is therefore useful to base oneself on the technical know-how and experience of organic producers in your area, to orient oneself to varieties that have demonstrated adaptability to the territory, ability to compete with weeds and resistance to major adversities. This attention is very valid for new plants of fruit trees and tree crops in general;
• Creation of hedges and trees – useful not only to improve the landscape but to increase biodiversity, therefore the protection of crops, giving hospitality to natural predators of pests and also acting as a physical barrier to possible external pollutants;
• The consociation – not turning over the ground over 25/30 cm and ensuring the breaking of the deeper layers with disjointed tools, always trying to protect the soil, favoring stability with suitable hydraulic arrangements and applying, where possible and especially in the arboretums vegetable cover;
The systematic application of these techniques helps to create balance in the company; if, however, it is necessary to intervene to defend crops from pests and other adversities, the farmer can make use of the products allowed by the European Regulation, listed in the annexes with the criterion of the so-called “positive list”.
From: AIAB – Italian Biological Agriculture Association – has a federal structure with the central office in Rome and 15 Regional Associations operating autonomously in the area with its own offices and collaborators (regional offices in Basilicata, Campania, Calabria, Emilia Romagna , Friuli Venezia Giulia, Lazio, Lombardy, Liguria, Marche, Molise, Piedmont, Puglia, Sicily, Umbria, Veneto). 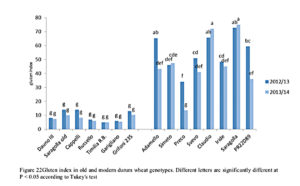 Celiac disease: gluten-free foods that are not always healthy, especially those for children 2017

Is gluten-free better? No, if you are not celiac. Here because.