The structure and properties of gluten

Extract from the study: The structure and properties of gluten

“…..omissis. One group of gluten proteins, the HMM subunits of glutenin, is particularly important in conferring high levels of elasticity (i.e. dough strength). These proteins are present in HMM polymers that are stabilized by disulphide bonds and are considered to form the ‘elastic backbone’ of gluten. However, the glutamine-rich repetitive sequences that comprise the central parts of the HMM subunits also form extensive arrays of interchain hydrogen bonds that may contribute to the elastic properties via a ‘loop and train*’ mechanism. Genetic engineering can be used to manipulate the amount and composition of the HMM subunits, leading to either increased dough strength or to more drastic changes in gluten structure and properties.

….omissis. These properties are usually described as viscoelasticity, with the balance between the extensibility and elasticity determining the end use quality. For example, highly elastic (‘strong’) doughs are required for breadmaking but more extensible doughs are required for making cakes and biscuits. Omisdsis….The grain proteins determine the viscoelastic properties of dough, in particular, the storage proteins that form a network in the dough called gluten (Schofield 1994). Consequently, the gluten proteins have been widely stud ied over a period in excess of 250 year, in order to determine their structures and properties and to provide a basis for manipulating and improving end use quality. 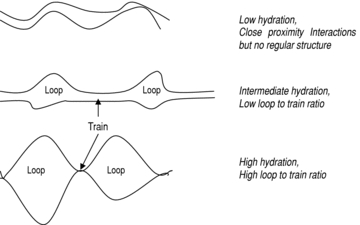 …omissis. As a result of the formation of a protein matrix, individual cells of wheat ﬂour contain networks of gluten proteins, which are brought together during dough mix ing. The precise changes that occur in the dough during mixing are still not completely understood, but an increase in dough stiffness occurs that is generally considered to result from ‘optimization’ of protein–protein interactions within the gluten network. In molecular terms, this ‘optimization’ may include some exchange of disulphide bonds as mixing in air, oxygen and nitrogen result in different effects on the sulphydryl and disulphide contents of dough (Tsen & Bushuk 1963; Mecham & Knapp 1966).