(for a finally normal 2021!)
A test for the realization of a very particular product: the carasau bread (puff bread) of pure einkorn wheat. A not easy realization considering the rheological characteristics of the einkorn wheat: little gluten and also weak. The dough has very little elasticity and cannot be manipulated for long because the gluten network breaks down. Method chosen: this test was carried out using the method (increasing the quantity of the pre-ferment) of the pre-ferment followed by the final dough already used for the bread.
https://glutenlight.eu/2019/09/27/pane-di-grano-monococco-piccolo-farro-100/.
Furthermore the method was adapted for a home preparation, so without the use – for example – of a a retarder prover. Times and temperatures have been defined for a semi-wholemeal einkorn flour (a flour through a 600 micron sieve), stone-ground flour, produced by “I grani di Atlantide” di Lorenzo Moi” 2019 harvest.
The “W” index of this flour is modest, placing itself below the value of 50. This clarification is necessary, because especially times and temperatures vary according to the flour (type and harvest) and its degree of refining (quantity of bran present). The method is for expert people”.

Steps
1 step: refresh the sourdough – made with einkorn wheat- as liquid batter (Li.Co.Li.) not as stiff dough twice in a row and use it well mature (preparation times vary depending on the room temperature, on average 4 hours + 4 hours). Li.Co.Li. should be stored (as a precaution) in the refrigerator and, therefore, before cooling it, it should be kept for at least 1 hour at room temperature.
2 step: prepare the preferment with 700gr. flour and 350gr. of water, both cold (from the refrigerator), 90gr. Of LiCoLi and 0.7gr. of fresh compressed beer yeast dissolved in very little non-cold water. The preferment should be mixed unstrung, it must not be wet or dry but lumpy pasty. The temperature of the pre-mix at the end of the preparation must be around 18C °.
3 step: put the preferment in a plastic bowl (lightly greased with seed oil) covered at 18 ° C for 12 hours.
4 step: after 12 hours, place the preferment in a mixer / mixer bowl, add 105gr. of water, 45gr. of olive oil and use a blade blender to dissolve it and incorporate a lot of air (perform with care). Now add the malt (10.8gr.), the yeast (0.6gr.) dissolved in very little non-cold water and blend again.
5 step: now using the planetary mixer with the hook, add all the flour still available with salt (16,2gr.). If there is flour left in the bottom of the bowl, add a little water, very very little.
6 step: complete by hand to homogenize.
7 step: then put the dough in 2 covered plastic bowl (lightly greased with seed oil) in the fridge checking that the temperature of the dough does not exceed about 18 degrees so that the dough ripens in the cold but little, very little yeast; the leavening will take place later. After 4 hours pick up the first; after 8 hours the second following the same procedure.
8 step: take the bowl from the fridge, divide the dough into 8/10 parts, according to the desired size of the carasau bread and pull each part by hand with a rolling pin trying to make them as thin as possible using powdered flour (working with cold dough).
9 step: With a pre-heated oven, bake one or more carasau bred placed on an iron tray (according to the capacity of the oven). Temperature: 225/230 for 6/8 minutes at the middle level.

Note:
1 – step n. 4, 5, 6 and 7: total time approximately 30 minutes
2 – the flour and water must have a temperature so that the dough has a temperature of about 18 degrees at the end of the 6th step.
3 – to make the puffy bread: spread the dough to make the puffy bread, fold the carasau bread, create the desired shape by cutting them with a ravioli cutter. Pay attention to the edges: they must be tightly closed otherwise in the oven the internal air will escape and the puffy bread will not swell. 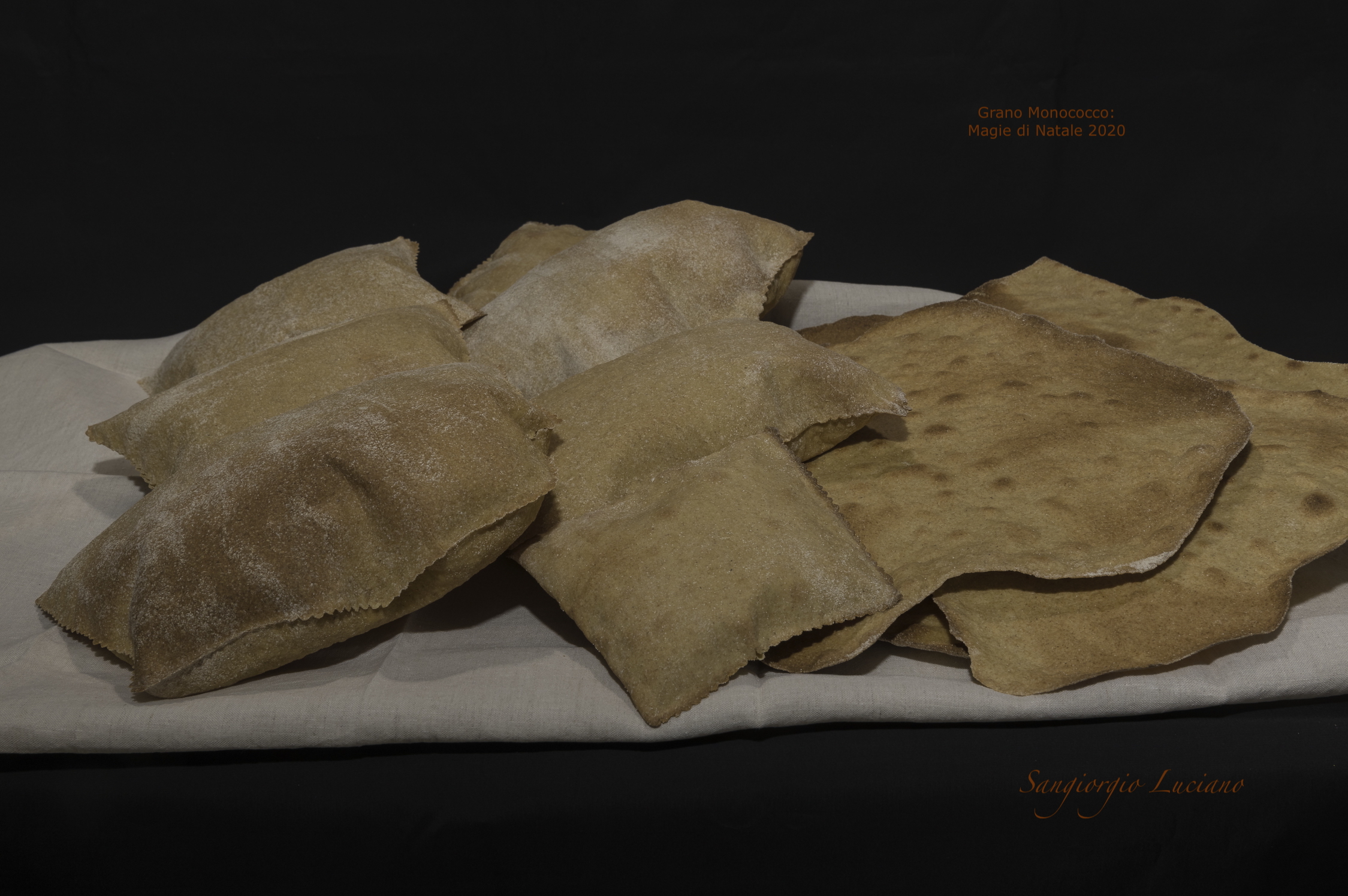